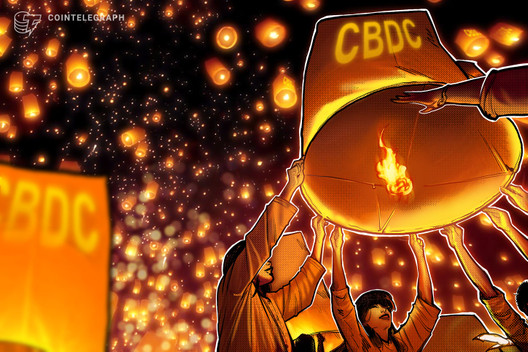 The Chinese central bank will reportedly start the distribution of the digital currency e-CNY in four provinces of the country, including Guangdong.

China’s central bank vice-president Fan Yifei said at an event in Suzhou that the bank will launch e-CNY trials in Guangdong, Jiangsu, Hebei and Sichuan provinces, according to a report by the South China Morning Post on Tuesday. told. States with populations of more than 360 million will create a significant expansion in the central bank’s CBDC plans.

China’s central bank aims to use digital yuan instead of cash as a result of the first CBDC trials it launched in April 2020. Digital wallet of 261 million users, paying more than $13 billion in transaction fees for e-CNY since January 2022 founded reported. In addition, China introduced its own digital currency during the 2022 Beijing Winter Olympics, allowing payments using e-CNY on certain public buses in August.

Neither the Chinese central bank nor the Chinese Government officials have made any statements regarding the rollout of CBDC throughout the country. In contrast, Fan Yifei stated that e-CNY trials in the four states will be launched at an “appropriate time”.

The Bahamas became the first country to officially launch CDBC in October 2020. While both Nigeria and China are still in the testing phase of their respective digital currencies, the United States has not announced any definitive plans to roll out digital dollars. Under US President Joe Biden’s mandate regarding digital assets in March, government agencies began exploring the potential benefits and risks of CBDC.